ANGARA BATS FOR BIRTHING FACILITY IN EVERY HEALTH CENTER 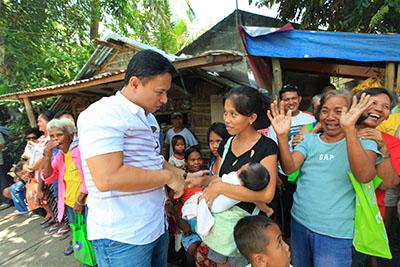 Reelectionist Senator Sonny Angara said every barangay in the country should have a birthing facility to help reduce the risk of maternal and infant deaths.

“There should be a safe and sustainable birth center in every barangay to give mothers and their children access to health care providers without breaking the bank,” said the lawmaker, who is running under the platform “Alagang Angara.”

According to the World Health Organization, approximately 830 women die from preventable causes related to pregnancy and childbirth every day all over the world and 99 percent of maternal deaths occur in developing countries like the Philippines.

Government statistics show that in 2017, the infant mortality rate in the Philippines was at about 22.2 deaths per 1,000 live births.

In 2015, the Department of Health (DOH) started enforcing the “no home birthing policy” in response to the soaring number of maternal and neo-natal deaths in the country.

“The DOH came up with the policy in order to curb maternal and infant deaths amid findings that giving birth at home meets several complications and untoward problems that cause mortality,” Angara said.

Based on the DOH’s 2010 maternal mortality report, hypertension complicated by pregnancy and postpartum hemorrhage were the leading causes of maternal death. Others were sepsis, obstructed labor and complications around unsafe abortion and giving births at home, most of which are preventable with proper diagnosis and intervention.

Angara, chair of the Senate Committee on Local Government, had earlier filed Senate Bill 2097 or the proposed Magna Carta for Barangays, which aims to help barangays perform their mandate of delivering basic services by providing facilities including health centers.

The lawmaker said that more than 42,000, including the new barangays created by 18 laws earlier deliberated on and passed by his committee, stand to benefit from the bill.

Angara is also one of the authors of the First 1,000 Days Law, which was signed by President Rodrigo Duterte in December last year.

The health package under the law provides for proper nutrition for pregnant mothers, improved breastfeeding and complementary feeding practices, protection against diseases and appropriate feeding of children who are sick and undernourished.

With the “Kalusugan at Nutrition ng Mag-Nanay Act,” Angara said mothers and their children are now assured of better health care services during the early days of child development.

“The law aims to improve child survival and development with the first 1,000 days of life from conception up to two years of age, as it would protect both the mother and the child against malnutrition, diseases and even death,” Angara said.

Statement of Senator Sonny Angara
INCOMING DBM SECRETARY NI PBBM, HIGHLY-QUALIFED, MAY MAIPAGMAMALAKING TRACK-RECORD -- ANGARA
Statement of Sen. Sonny Angara on the Appointment of Amenah Pangandaman as DBM Secretary
PDIC charter amendments for a stronger and more resilient banking system—Angara
Kaugnay sa muling paglobo ng COVID cases sa bansa: “MAGPABAKUNA, SUMUNOD SA HEALTH PROTOCOLS AT PATULOY NA PAG-INGATAN ANG KALUSUGAN” - ANGARA
Statement of Committee on Finance Chairman, Sen. Sonny Angara on the signing of the 2022 GAA
Angara reminds PhilHealth of their obligations to the public
Threat of Omicron highlights need to improve biosurveillance and genome sequencing capabilities—Angara
Angara: Don’t let vaccines go to waste-- Allow booster shots for private sector workers
SEN. ANGARA ON THE THREAT OF HOSPITALS TO WITHDRAW FROM PHILHEALTH SYSTEM BECAUSE OF DELAYED REIMBURSMENTS OF CLAIMS:
Angara: Decline in COVID cases should not result in complacency
Angara: Go the extra mile to vaccinate our senior citizens
Angara to DOLE: Targeted interventions needed to ensure no one is left behind
It’s about time to rebuild the homes of the people of Marawi—Angara
Angara: Benefits for health workers should continue while the COVID pandemic is in place
Angara urges youth impacted by COVID to avail of jobs under the Expanded SPES Law
Angara: The national budget must be able to keep pace with COVID-19
Angara hopes to finally see the passage of the Magna Carta of Filipino Seafarers
Angara: Move towards digital payments welcome to all sectors
Angara tells DOH to speed up hiring of doctors and nurses for public hospitals
END_OF_DOCUMENT_TOKEN_TO_BE_REPLACED