Angara: Growing number of out of school youth is a cause of concern 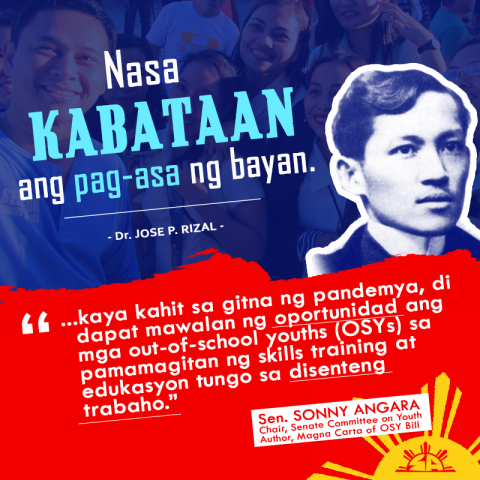 Senator Sonny Angara said today there is a need to pay more attention to the situation of out of school youth (OSY), particularly at this time when their numbers are growing due to the impact of the COVID-19 pandemic on education.

As chairman of the Committee on Youth, Angara noted that the increase in the number of OSY is a serious issue that could lead to bigger problems later on if left unchecked.

Based on data from the Department of Education (DepEd), close to four million students were not able to enroll for the current school year.

As of 11 August 2020, the DepEd noted that some 23M have enrolled in both public and private schools, a significant reduction from the 27.7 million enrollees in 2019.

According to the DepEd, 2.75 million of the four million who did not enroll were private school students.

“We understand that the sharp drop in enrollment for the current school year was due to the restrictions on face-to-face education. We hope to see these figures improve once our schools start to open up again, albeit gradually,” Angara said.

“What worries me is that many of the children who were not able to enroll last year could end up missing even more time out of school or worse, drop out completely for one reason or another,” Angara added.

Based on 2017 Philippine Statistics Authority data, nine percent or 3.53 million of the estimated 39.2 Filipinos aged 6 to 24 years old were considered OSYs.

The PSA data indicated that the most common reasons among OSYs for not attending school were marriage or family matters, lack of personal interest, and high cost of education or financial
concerns.

Around 50% of OSYs belong to families whose income fall within the bottom 30% of the population based on their per capita income.

“The data is alarming and there is a real danger that we’ll end up with even more OSYs now because of the impact of the pandemic on family incomes and the challenges posed by blended learning on both students and their parents alike,” Angara said.

To help address the issue, Angara is pushing for the establishment of a Magna Carta of the OSYs as proposed in his Senate Bill 1090.

The bill seeks to strengthen the State’s mandate of instituting policies and programs for the development of OSYs in the country and to encourage them to seek out the various opportunities available to them.

Angara said a whole of government approach will be needed to effectively address the needs and concerns of OSYs, with the DepEd, TESDA, CHEd, DOH, DSWD, DOLE and DTI as the agencies leading the charge.

Among the different programs that are envisioned to come out as a result of the Magna Carta of the OSY are the free mandatory technical/vocational education through TESDA and the inclusion in the government scholarships under the Universal Access to Quality Tertiary Education (UAQTEA) and the Unified Student Financial Assistance System for Tertiary Education (UNIFast) through the CHEd.

Apart from ensuring OSYs get a proper education, the government will also see to it that they receive all health benefits under the law, as well as the appropriate  social services.

The government will also be tasked to help OSYs get employed or find a viable source of livelihood by providing them with the skills or livelihood support.

Under the bill, OSY refers to members of the population who are 15 to 30 years old, who are not in school, not gainfully employed, and have not finished college or a post-secondary course.

INCOMING DBM SECRETARY NI PBBM, HIGHLY-QUALIFED, MAY MAIPAGMAMALAKING TRACK-RECORD -- ANGARA
Statement of Sen. Sonny Angara on the Appointment of Amenah Pangandaman as DBM Secretary
PDIC charter amendments for a stronger and more resilient banking system—Angara
Kaugnay sa muling paglobo ng COVID cases sa bansa: “MAGPABAKUNA, SUMUNOD SA HEALTH PROTOCOLS AT PATULOY NA PAG-INGATAN ANG KALUSUGAN” - ANGARA
Statement of Committee on Finance Chairman, Sen. Sonny Angara on the signing of the 2022 GAA
Angara reminds PhilHealth of their obligations to the public
Angara: Don’t let vaccines go to waste-- Allow booster shots for private sector workers
Threat of Omicron highlights need to improve biosurveillance and genome sequencing capabilities—Angara
SEN. ANGARA ON THE THREAT OF HOSPITALS TO WITHDRAW FROM PHILHEALTH SYSTEM BECAUSE OF DELAYED REIMBURSMENTS OF CLAIMS:
Angara: Decline in COVID cases should not result in complacency
Angara: Go the extra mile to vaccinate our senior citizens
Angara to DOLE: Targeted interventions needed to ensure no one is left behind
It’s about time to rebuild the homes of the people of Marawi—Angara
Angara: Benefits for health workers should continue while the COVID pandemic is in place
Angara urges youth impacted by COVID to avail of jobs under the Expanded SPES Law
Angara: The national budget must be able to keep pace with COVID-19
Angara hopes to finally see the passage of the Magna Carta of Filipino Seafarers
Angara: Move towards digital payments welcome to all sectors
Angara tells DOH to speed up hiring of doctors and nurses for public hospitals
Angara to DOH: Provide health workers with hazard allowance as mandated by law
END_OF_DOCUMENT_TOKEN_TO_BE_REPLACED