Angara encourages LGUs, NGAs and businesses to help out with the community pantries 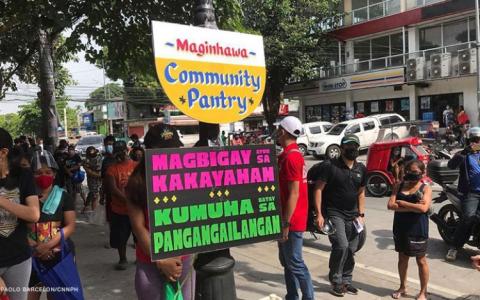 Senator Sonny Angara today urged the government and more private entities to replicate the community pantries that have been sprouting up in various areas across the country.

What was apparently started in Maginhawa in Quezon City has now been replicated in several other areas within and outside of Metro Manila with the intention of helping Filipinos who are in need of assistance in their own small way.

“It is encouraging to see more Filipinos demonstrating the bayanihan spirit by putting up community pantries for the benefit of people who are struggling during these very challenging times,” Angara said.

Angara said that these small efforts by private citizens could have an even greater impact if the government and businesses will participate, starting in the areas where they are situated.

“We encourage our local government units, the national government, and even private businesses who can afford it to replicate and even scale up these community pantries to cater to even more people,” Angara said.

The Senator argued that huge budgets are not necessary here because during these trying times, any kind of help that will go to those in need is appreciated.

Manufacturers of food products for instance can share their production through their own pantries or just bring them over to the existing operations in their respective areas.

“One small gesture when duplicated by a large number of people will amount to something very meaningful,” Angara said.