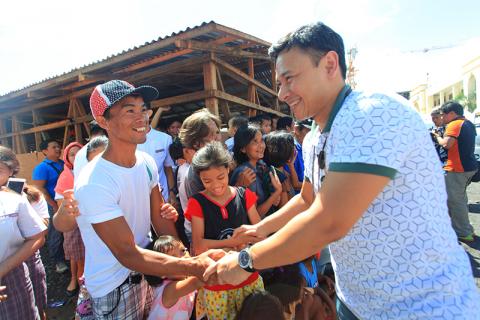 Angara said the 12-year-old human development program—designed to keep children in school and keep them healthy—had been proven to be an effective tool for poverty alleviation. First implemented in 2007, 4Ps invests in the health and education of poor households, particularly children aged 0-18 years old

“The 4Ps helps reduce poverty and break the intergenerational cycle of poverty through investments in the health and education of Filipino children,” Angara said.

Patterned after the CCT scheme enforced in other developing countries, 4Ps provides cash grants to beneficiaries provided that they comply with the set of conditions required by the program.

Angara is one of the authors of a bill seeking to institutionalize 4Ps, which is now one step closer to becoming a law after the Senate and the House of Representatives approved the measure. The enrolled bill will be sent to Malacañang for President Duterte’s signature.

The senator said it was important to institutionalize the 4Ps through legislation to ensure its continuity and unhampered implementation by any administration.

When he filed his bill in 2016, Angara backed up the measure with studies showing that the 4Ps reduced the total poverty among CCT beneficiaries from 64.5 percent to 58 percent, or by 6.5 percentage points, according to a joint study by the World Bank and Australian Aid.

It also decreased food poverty rate from 35.2 percent to 28.5 percent after the program implementation, or by 6.7 percentage points. This implies that 1.3 million Filipinos were lifted out of poverty through 4Ps.

Data from the Department of Finance showed that there are about 4.4 million active household beneficiaries under the 4Ps program, as of January 14, 2019.

Statement of Senator Sonny Angara
INCOMING DBM SECRETARY NI PBBM, HIGHLY-QUALIFED, MAY MAIPAGMAMALAKING TRACK-RECORD -- ANGARA
Statement of Sen. Sonny Angara on the Appointment of Amenah Pangandaman as DBM Secretary
PDIC charter amendments for a stronger and more resilient banking system—Angara
Kaugnay sa muling paglobo ng COVID cases sa bansa: “MAGPABAKUNA, SUMUNOD SA HEALTH PROTOCOLS AT PATULOY NA PAG-INGATAN ANG KALUSUGAN” - ANGARA
Statement of Committee on Finance Chairman, Sen. Sonny Angara on the signing of the 2022 GAA
Angara reminds PhilHealth of their obligations to the public
Threat of Omicron highlights need to improve biosurveillance and genome sequencing capabilities—Angara
Angara: Don’t let vaccines go to waste-- Allow booster shots for private sector workers
SEN. ANGARA ON THE THREAT OF HOSPITALS TO WITHDRAW FROM PHILHEALTH SYSTEM BECAUSE OF DELAYED REIMBURSMENTS OF CLAIMS:
Angara: Decline in COVID cases should not result in complacency
Angara: Go the extra mile to vaccinate our senior citizens
Angara to DOLE: Targeted interventions needed to ensure no one is left behind
It’s about time to rebuild the homes of the people of Marawi—Angara
Angara: Benefits for health workers should continue while the COVID pandemic is in place
Angara urges youth impacted by COVID to avail of jobs under the Expanded SPES Law
Angara: The national budget must be able to keep pace with COVID-19
Angara hopes to finally see the passage of the Magna Carta of Filipino Seafarers
Angara: Move towards digital payments welcome to all sectors
Angara tells DOH to speed up hiring of doctors and nurses for public hospitals
END_OF_DOCUMENT_TOKEN_TO_BE_REPLACED