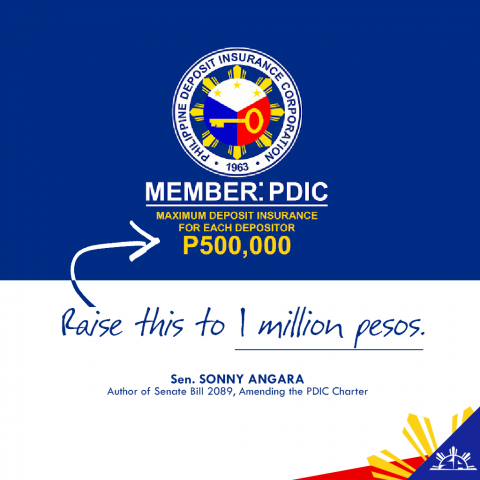 With more Filipinos now putting their money in banks, Senator Sonny Angara is looking to hike the deposit insurance coverage provided by the Philippine Deposit Insurance Corporation (PDIC) from the present P500,000 to P1 million per depositor.

Under Senate Bill 2089 filed by Angara, further amendments to the charter of the PDIC will be introduced in order to make it more responsive to the constantly changing financial landscape in the country.

Foremost among the proposed amendments is the increase in the deposit insurance coverage of PDIC to P1 million from the present P500,000.

“It is encouraging to note that more and more Filipinos are now saving money by depositing these in our banks. In order to further boost their confidence in the banking system, especially during these very challenging times, we are proposing to increase by 100 percent the deposit insurance coverage,” Angara said.

It was Angara’s father, the late former Senate President Edgardo Angara, who spearheaded the approval of Republic Act 9576 in 2009, which implemented the last increase in the deposit insurance coverage from P250,000 to P500,000.

Based on the bill, the maximum deposit insurance coverage is subject to review by the PDIC Board of Directors every three years and may be increased to an amount indexed to inflation or other economic indicators as may be deemed appropriate by the Board.

To avoid an overlap in functions between the PDIC and the Bangko Sentral ng Pilipinas (BSP), as the regulator of the country’s banking system, the bill modifies certain powers of the state deposit insurer.

For one, the powers of the PDIC on bank resolution, including the grant of consent to mergers and acquisitions, and the issuance of cease and desist orders pertaining to deposit-related unsafe and/or unsound banking would be centralized with the BSP.

The PDIC would also be transferred as an attached corporation of the Department of Finance to the BSP.

To ensure that the compensation scheme of PDIC is aligned with the other government owned and controlled corporations and government institutions, the bill also seeks to remove the exemption from the salary standardization laws that was granted to the corporation.

“There is so much uncertainty in the lives of almost all Filipinos at this time and keeping their savings secured is all the more important to them. We want to reinforce the people’s trust in the banking system with this measure and further strengthen the mandate of PDIC, not only as the insurer of deposits but as liquidator of troubled banks,” Angara said.