Angara to DOH: Provide health workers with hazard allowance as mandated by law 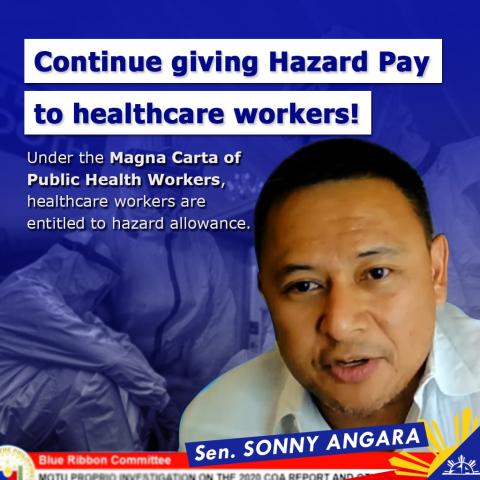 Senator Sonny Angara reminded the Department of Health (DOH) today that apart from the special risk allowance (SRA) to health workers, they are also entitled to hazard allowance as the frontliners in the country’s battle against COVID-19.

Citing Section 21 of Republic Act 7305 or the Magna Carta of Public Health Workers, Angara said that during this pandemic government health frontliners are entitled to hazard allowance equivalent to at least twenty-five percent of the monthly basic salary of health workers receiving salary grade 19 and below, and five percent for health workers with salary grade 20 and above.

The Senator said health workers, including the nurses should be provided with the hazard allowance already using the Magna Carta of Public Health Workers, which was authored by his father, the late former Senate President Edgardo Angara, as the legal basis.

Angara brought up the issue of the hazard allowance after it was noted during the Senate Blue Ribbon Committee hearings on the utilization of funds by the DOH that the grant of SRA to health workers ended when the Bayanihan to Recover as One Act or Bayanihan 2 expired last June 30.

The chairman of the Committee on Finance emphasized that the grant of SRA to private and public health workers should continue even after the expiration of Bayanihan 2 for as long as the state of national emergency as declared by President Duterte is in place.

Many health workers are up in arms over the delays in the downloading of their benefits, including the SRA since last year.

Part of the delay in the payment of SRA stems from the interpretation of Bayanihan 2’s provision on this benefit, which states that this benefit is provided to “all public and private health workers directly catering to or in contact with COVID-19 patients.”

This provision has been interpreted to cover only those who are assigned to COVID-19 wards or patients who have COVID-19.

During the Blue Ribbon Committee hearing, Health Secretary Francisco Duque said that a law will be needed to allow the grant of SRA to all health workers “owing to the high transmissibility of the Delta variant.”

Both Blue Ribbon Committee chairman Sen. Richard Gordon and Angara have expressed willingness to file the bill being sought by the DOH but maintained that the agency should take a more liberal interpretation on the grant of SRA considering the critical situation being faced by our health workers today.

“We will fast track the bill that Sen. Gordon wants to file and I will co-author that with him because it is of utmost importance. I thank Sen. Gordon for his dynamism and urgency in wanting to file that bill,” Angara said.

PDIC charter amendments for a stronger and more resilient banking system—Angara
Kaugnay sa muling paglobo ng COVID cases sa bansa: “MAGPABAKUNA, SUMUNOD SA HEALTH PROTOCOLS AT PATULOY NA PAG-INGATAN ANG KALUSUGAN” - ANGARA
Statement of Committee on Finance Chairman, Sen. Sonny Angara on the signing of the 2022 GAA
Angara reminds PhilHealth of their obligations to the public
Angara: Don’t let vaccines go to waste-- Allow booster shots for private sector workers
Threat of Omicron highlights need to improve biosurveillance and genome sequencing capabilities—Angara
SEN. ANGARA ON THE THREAT OF HOSPITALS TO WITHDRAW FROM PHILHEALTH SYSTEM BECAUSE OF DELAYED REIMBURSMENTS OF CLAIMS:
Angara: Decline in COVID cases should not result in complacency
Angara: Go the extra mile to vaccinate our senior citizens
Angara to DOLE: Targeted interventions needed to ensure no one is left behind
It’s about time to rebuild the homes of the people of Marawi—Angara
Angara: Benefits for health workers should continue while the COVID pandemic is in place
Angara urges youth impacted by COVID to avail of jobs under the Expanded SPES Law
Angara: The national budget must be able to keep pace with COVID-19
Angara hopes to finally see the passage of the Magna Carta of Filipino Seafarers
Angara: Move towards digital payments welcome to all sectors
Angara tells DOH to speed up hiring of doctors and nurses for public hospitals
Angara to DOH: Provide health workers with hazard allowance as mandated by law
OWWA Law provides benefits and assistance to repatriated OFWs from Afghanistan-- Angara
Angara to PhilHealth: Expedite the settlement of hospital claims
END_OF_DOCUMENT_TOKEN_TO_BE_REPLACED