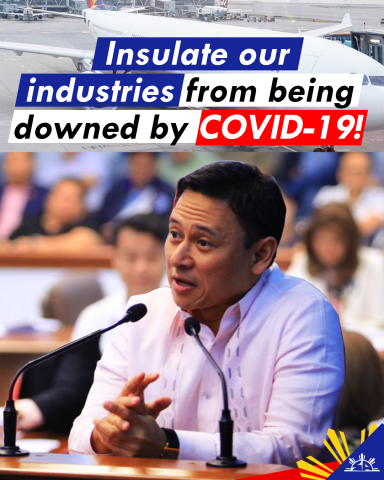 With the announcement made by Philippine Airlines (PAL) that it has laid off 300 of its personnel, the government cannot afford to be complacent in addressing the impacts of the COVID-19 on the economy, Senator Sonny Angara said today.

“We have been spared from deaths caused by COVID-19 but sadly the pandemic has taken away the jobs of 300 hardworking men and women of our country's flag carrier,” Angara said.

“There is no end in sight yet and more countries are implementing drastic measures to keep their citizens safe, including our own. Our authorities should prepare for the worst and insulate, not only our people from the virus, but also our industries from being downed by COVID-19,” he added.

As a first step, Angara said the Department of Labor and Employment should already be conducting a survey of all companies that are laying off its workers due to a slowdown of economic activity, be it COVID-19-related or other factors.

Not all companies are the size of PAL, which could afford to provide separation packages to its affected employees. There are smaller players, particularly those in the tourism sector such as the tour guides, bed and breakfast operators and vehicle rentals who need the foreign visitors to put food on their tables.

Under the 2020 General Appropriations Act, the DOLE has P112.62 million for its Adjustment Measures Program and P6.8 billion for its Tulong Panghanapbuhay sa Ating Disadvantaged/Displaced Workers or TUPAD.

“Now more than ever our entire government should work together in making our domestic industries stronger, more competitive, productive and resilient. This way they will be less prone to external shocks and continue to provide jobs to our people, uplift their communities and bring the Philippines closer to being an industrialized nation,” Angara added.

Angara: Go the extra mile to vaccinate our senior citizens
Angara to DOLE: Targeted interventions needed to ensure no one is left behind
It’s about time to rebuild the homes of the people of Marawi—Angara
Angara: Benefits for health workers should continue while the COVID pandemic is in place
Angara urges youth impacted by COVID to avail of jobs under the Expanded SPES Law
Angara: The national budget must be able to keep pace with COVID-19
Angara hopes to finally see the passage of the Magna Carta of Filipino Seafarers
Angara: Move towards digital payments welcome to all sectors
Angara tells DOH to speed up hiring of doctors and nurses for public hospitals
Angara to DOH: Provide health workers with hazard allowance as mandated by law
OWWA Law provides benefits and assistance to repatriated OFWs from Afghanistan-- Angara
Angara to PhilHealth: Expedite the settlement of hospital claims
Angara: Ramp up biosurveillance and genome sequencing to control the spread of new COVID-19 variants
Angara thanks the DOF and BIR for suspending the controversial tax on schools
Angara: 2022 budget should map out the road to recovery from the COVID-19 pandemic
STATEMENT OF SEN. SONNY ANGARA
Provide accommodations to public school teachers who need it the most-- Angara
Angara pushes for satellite venues for PRC licensure examinations
Angara to push for scholarships in foreign universities for deserving students
Angara: Benefits for health frontliners, other provisions to continue even after B2 extension expiry
END_OF_DOCUMENT_TOKEN_TO_BE_REPLACED