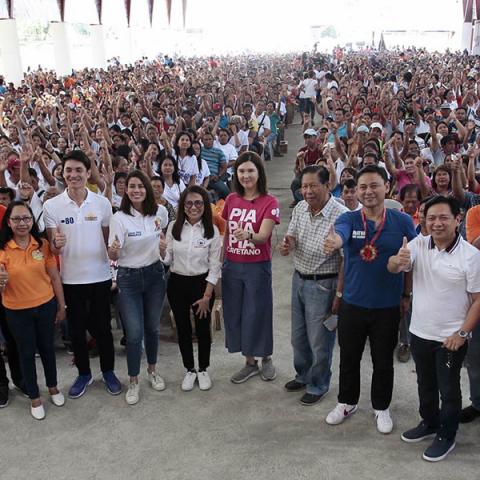 Reelectionist Senator Sonny Angara said the government must harness the potential of a coastal town in Quezon province as an international seaport to attract investments that will create massive employment opportunities not just for the province, but for the entire CALABARZON region.

With its strategic location, Angara said the municipality of Gumaca in southern Quezon could position itself as an important gateway to Asia in the South China Sea, locally known as West Philippine Sea.

“Gumaca should take advantage of its location and become an important economic center outside Metro Manila,” Angara said, as he was scheduled to campaign in the coastal town which is 139 kilometers away from Manila.

“Its potential to generate employment for the locals and create immense economic opportunities for the entire region should not be overlooked,” added the lawmaker from Aurora, who is running under the platform “Alagang Angara.”

Angara said he fully supports the plan of the Gumaca municipal government to build the Quezon International Seaport within a 300-hectare reclamation property, which is envisioned as a launching pad of all future delivery, transfers, import and export of both raw materials and finished products.

“If this ambitious project pushes through, it will bring new jobs and economic opportunities not just for the people of Quezon province, but the entire CALABARZON region,” Angara said.

Pending the construction of the seaport, Angara said the country is missing an opportunity to tap into a huge maritime trade in South China Sea, which carries an estimated one-third of global shipping.

In 2016, it was estimated that $3.37 trillion in world trade passed through South China Sea whose waters are particularly critical for China, South Korea and Japan, all of which rely on the Strait of Malacca, which connects the South China Sea and, by extension, the Pacific Ocean with the Indian Ocean.

Angara lamented that despite its strategic location, the Philippines is not even among the top 10 exporters in the world in terms of product value.

Angara is a known advocate for the creation of quality jobs for Filipinos to prevent them from leaving the country to work abroad.

He is the sponsor of Republic Act 10691 or the law strengthening the Public Employment Service Office (PESO), which serves as a venue for Filipinos to explore employment opportunities.

The law provides for the establishment of PESO, an office under the Department of Labor and Employment, in every province, city and municipality in the country.

Just recently, Angara urged the government to look for ways to attract investments that will create higher-paying jobs to encourage Filipinos to stay and work in the country.

The government, he said, may consider launching a new “Made-in-the-Philippines” campaign, which would make use of the country’s unique competitive advantage in the services sector, which in 2018 posted the highest share in the country’s gross domestic product or GDP at 56.2 percent.

Angara celebrates the enactment of three laws for the youth
Statement of Sen Angara on the Enactment into Law of the Social Pension for Seniors
Sen. Angara on the passing of former Pres. Fidel V Ramos
Angara-- Restore the heritage sites damaged by the Abra quake at the soonest possible time
Angara sees the establishment of satellite specialty hospitals as timely and doable
Reaksyon ni Sen. Sonny Angara sa SONA ni PBBM
Statement of Senator Sonny Angara
INCOMING DBM SECRETARY NI PBBM, HIGHLY-QUALIFED, MAY MAIPAGMAMALAKING TRACK-RECORD -- ANGARA
Statement of Sen. Sonny Angara on the Appointment of Amenah Pangandaman as DBM Secretary
PDIC charter amendments for a stronger and more resilient banking system—Angara
Kaugnay sa muling paglobo ng COVID cases sa bansa: “MAGPABAKUNA, SUMUNOD SA HEALTH PROTOCOLS AT PATULOY NA PAG-INGATAN ANG KALUSUGAN” - ANGARA
Statement of Committee on Finance Chairman, Sen. Sonny Angara on the signing of the 2022 GAA
Angara reminds PhilHealth of their obligations to the public
Threat of Omicron highlights need to improve biosurveillance and genome sequencing capabilities—Angara
Angara: Don’t let vaccines go to waste-- Allow booster shots for private sector workers
SEN. ANGARA ON THE THREAT OF HOSPITALS TO WITHDRAW FROM PHILHEALTH SYSTEM BECAUSE OF DELAYED REIMBURSMENTS OF CLAIMS:
Angara: Decline in COVID cases should not result in complacency
Angara: Go the extra mile to vaccinate our senior citizens
Angara to DOLE: Targeted interventions needed to ensure no one is left behind
It’s about time to rebuild the homes of the people of Marawi—Angara
END_OF_DOCUMENT_TOKEN_TO_BE_REPLACED