ANGARA: TIME TO GIVE TEACHERS THEIR OVERDUE SALARY INCREASE 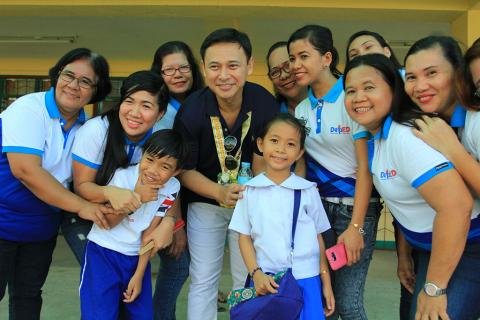 Sen. Sonny Angara today filed a bill increasing the salaries of public school teachers, a move  that dovetails with President Duterte’s promise to the country's 800,000 public mentors that it will be their turn to get a salary increase following the one given to soldiers and policemen.

In his bill, Angara  proposed that the present Salary Grade (SG) 11 of entry-level teachers be increased to SG 19.

To avoid “salary distortion”,  the bill seeks to adjust correspondingly the salaries of teachers holding higher salary grades such as the Master Teachers. "It will be across-the-board," Angara said.

But the “upgrading in salary levels for all the corresponding teacher plantilla positions” will be done over a period of at least five years to allow the Department of Budget and Management  to make the necessary budgetary adjustments, Angara explained in his bill.

While members of the uniformed services of the  AFP and the DND   have had their base pay increased already, with some ranks seeing their pay doubled, teachers have yet to receive theirs, despite repeated assurances from the Chief Executive.

Angara said a pay hike will demonstrate to the teachers the nation's gratitude for their selfless work in educating our children.

“It will greatly help in motivating our teachers to strive for excellence in their field and thus, improve the quality of our education ," he added.

Angara his bill  “will at the very least   set the ball rolling in discussing the  elements of the promised pay hike for DepEd teachers.”

“This sets the stage and the framework for this unfinished business and unredeemed promise. Kung may counter-proposal  ang executive, of course, we will listen. Ang importante, masimulan na ang diskusyon, “ he said.

Angara celebrates the enactment of three laws for the youth
Statement of Sen Angara on the Enactment into Law of the Social Pension for Seniors
Sen. Angara on the passing of former Pres. Fidel V Ramos
Angara-- Restore the heritage sites damaged by the Abra quake at the soonest possible time
Angara sees the establishment of satellite specialty hospitals as timely and doable
Reaksyon ni Sen. Sonny Angara sa SONA ni PBBM
Statement of Senator Sonny Angara
INCOMING DBM SECRETARY NI PBBM, HIGHLY-QUALIFED, MAY MAIPAGMAMALAKING TRACK-RECORD -- ANGARA
Statement of Sen. Sonny Angara on the Appointment of Amenah Pangandaman as DBM Secretary
PDIC charter amendments for a stronger and more resilient banking system—Angara
Kaugnay sa muling paglobo ng COVID cases sa bansa: “MAGPABAKUNA, SUMUNOD SA HEALTH PROTOCOLS AT PATULOY NA PAG-INGATAN ANG KALUSUGAN” - ANGARA
Statement of Committee on Finance Chairman, Sen. Sonny Angara on the signing of the 2022 GAA
Angara reminds PhilHealth of their obligations to the public
Threat of Omicron highlights need to improve biosurveillance and genome sequencing capabilities—Angara
Angara: Don’t let vaccines go to waste-- Allow booster shots for private sector workers
SEN. ANGARA ON THE THREAT OF HOSPITALS TO WITHDRAW FROM PHILHEALTH SYSTEM BECAUSE OF DELAYED REIMBURSMENTS OF CLAIMS:
Angara: Decline in COVID cases should not result in complacency
Angara: Go the extra mile to vaccinate our senior citizens
Angara to DOLE: Targeted interventions needed to ensure no one is left behind
It’s about time to rebuild the homes of the people of Marawi—Angara
END_OF_DOCUMENT_TOKEN_TO_BE_REPLACED