Angara: It's about time to recognize and do something about the plight of the country's Indigenous Peoples 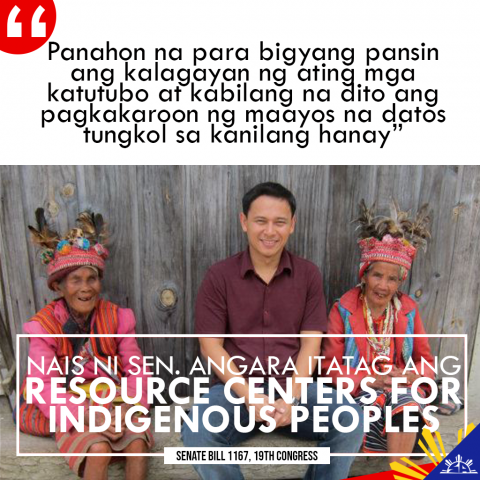 The government has to do more to uplift the lives of the indigenous peoples (IPs), who remain among the poorest and disadvantaged social groups in the country, Senator Sonny Angara said today.

Over 25 years have passed since the enactment of Republic Act 8731 or the Indigenous Peoples Rights Act (IPRA) and yet Angara lamented that little headway has been made to improve the lives of the IPs.

“We have over a hundred IP groups in the Philippines comprising anywhere between 14 to 17 million indigenous cultural communities (ICCs). Much has been said to protect the rights and ensure the welfare of our IPs but the reality is they continue to be among the most disadvantaged groups,” Angara said.

According to the World Bank, while IPs comprise only six percent of the global population, they account for nearly 20 percent of the world’s extreme poor.

“What exacerbates the situation of our IPs is the absence of reliable public data on ICCs and more often than not, this leads to situations where they are neglected in the delivery of basic, social, technical and even legal services,” Angara said.

To help remedy the situation, Angara has filed Senate Bill 1167 or the Resource Centers for Indigenous Peoples Act of 2022, that seeks to establish ICCs/IPs resource centers in strategic places, as determined by the National Commission on Indigenous Peoples (NCIP), taking into consideration their ethnological locations.

The Statistical Service Area will be responsible for the documentation and recognition of ICCs and IPs, their indigenous knowledge, systems and practices, political structures, and customary laws through census, appraisal and baseline reports and libraries.

For the Human Development Index Service Area, it will address the problems of ICCs and IPs and provide basic and necessary services through link-ups with concerned government departments and agencies, such as training programs, grant of scholarships, employment, livelihood and enterprises, and health services.

In the case of the Domains Management Service Area, it will be tasked to promote participatory programs, projects and activities for ICCs and IPs to effectively deliver their responsibility of maintaining ecological balance, restore denuded areas, observe laws, and ensure the implementation of the Ancestral Domains Sustainable Development and Protections Plans and other existing programs.