Angara bats for the naturalization of Angelo Kouame 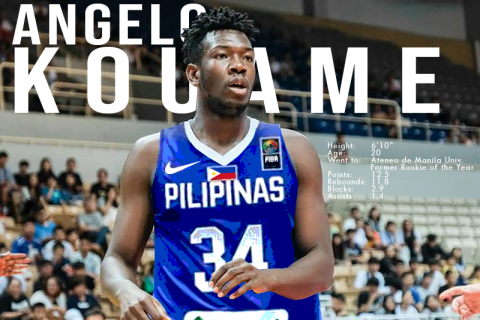 Senator Sonny Angara has endorsed the proposed entry of Angelo Kouame to Gilas Pilipinas with the filing of a bill calling for the grant of Philippine citizenship to the standout from the Ivory Coast.

Angara, who is chairman of the Samahang Basketbol ng Pilipinas (SBP), filed Senate Bill 1892 last Thursday as part of the country’s ongoing efforts to build up its national team in time for the 2023 World Cup.

“We have seen what Kouame has accomplished as a member of the Ateneo Blue Eagles in the past three years and his game continues to develop. We have not seen the full potential of Kouame yet and his desire to continue developing his game here in the Philippines is something that is worth supporting,” Angara said.

“Ange has also shown a strong desire to continue living in the Philippines, which has been his home since 2016. I have no doubt he will provide an invaluable contribution to Philippine hoops for many years to come,” he added.

At age 20, Kouame is expected to be part of the pool of naturalized players of Gilas Pilipinas and should be available to play for the national squad until he turns pro.

This is not the first time that the Philippines has sought for the naturalization of athletes to help bolster the lineup of the Philippine men’s national team.

Congress previously granted Philippine citizenship to Marcus Douthit and Andray Blatche, who both contributed to the development of the national team.

Other countries have been doing the same for years as a way to improve their teams’ global rankings.

“During this time when almost all Filipinos are going through some of the toughest times in their lives, sports, particularly basketball, provides a welcome respite from all the challenges. The NBA just finished its season and now the PBA is back. I am excited to see our Gilas Pilipinas back in action too and with the likes of Kouame on their way to being part of the squad, the future is looking bright for Philippine hoops,” Angara said.

Statement of Senator Sonny Angara
INCOMING DBM SECRETARY NI PBBM, HIGHLY-QUALIFED, MAY MAIPAGMAMALAKING TRACK-RECORD -- ANGARA
Statement of Sen. Sonny Angara on the Appointment of Amenah Pangandaman as DBM Secretary
PDIC charter amendments for a stronger and more resilient banking system—Angara
Kaugnay sa muling paglobo ng COVID cases sa bansa: “MAGPABAKUNA, SUMUNOD SA HEALTH PROTOCOLS AT PATULOY NA PAG-INGATAN ANG KALUSUGAN” - ANGARA
Statement of Committee on Finance Chairman, Sen. Sonny Angara on the signing of the 2022 GAA
Angara reminds PhilHealth of their obligations to the public
Threat of Omicron highlights need to improve biosurveillance and genome sequencing capabilities—Angara
Angara: Don’t let vaccines go to waste-- Allow booster shots for private sector workers
SEN. ANGARA ON THE THREAT OF HOSPITALS TO WITHDRAW FROM PHILHEALTH SYSTEM BECAUSE OF DELAYED REIMBURSMENTS OF CLAIMS:
Angara: Decline in COVID cases should not result in complacency
Angara: Go the extra mile to vaccinate our senior citizens
Angara to DOLE: Targeted interventions needed to ensure no one is left behind
It’s about time to rebuild the homes of the people of Marawi—Angara
Angara: Benefits for health workers should continue while the COVID pandemic is in place
Angara urges youth impacted by COVID to avail of jobs under the Expanded SPES Law
Angara: The national budget must be able to keep pace with COVID-19
Angara hopes to finally see the passage of the Magna Carta of Filipino Seafarers
Angara: Move towards digital payments welcome to all sectors
Angara tells DOH to speed up hiring of doctors and nurses for public hospitals
END_OF_DOCUMENT_TOKEN_TO_BE_REPLACED