Brownlee’s naturalization will provide a big boost to Gilas Pilipinas 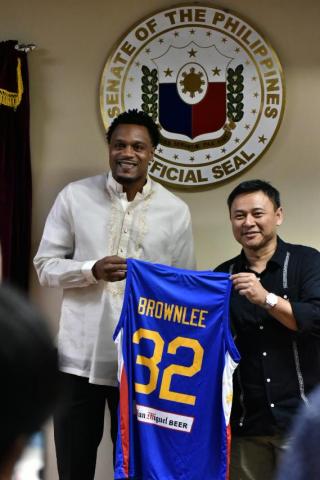 The naturalization of PBA import Justin Brownlee will beef up the roster of Gilas Pilipinas during the sixth window of the FIBA World Cup Asian Qualifiers in February while providing even more excitement to Filipino hoops fans, Senator Sonny Angara said today.

As the author of one of the bills that sought for the naturalization of Brownlee, Angara said the addition of Brownlee to the Philippine men’s national basketball team will provide further depth and firepower when it goes up against Lebanon and Jordan in February at the Philippine Arena in Bocaue, Bulacan.

“We would like to express our gratitude to our colleagues here in the Senate and the House of Representatives who gave their full support to the naturalization of Brownlee. After several years of playing as an import in the PBA, Brownlee has now deemed the Philippines as his second home and has demonstrated a strong desire to contribute to the country as a future player of our Gilas Pilipinas squad,” said Angara, who is chairman of the Samahang Basketbol ng Pilipinas (SBP).

The naturalization bills were filed by Senators Ronald Dela Rosa, Bong Go, Angara and Joel Villanueva, and were taken up in the Committee on Justice and Human Rights headed by Senator Francis Tolentino.

In the House of Representatives, the bills were filed by Reps. Mikee Romero and Gus Tambunting. SBP Vice Chairman Robbie Puno was among the co-authors of the bill.

The Senate approved House Bill 6224, without amendments, paving the way for the transmittal of the measure to the President for signing.

Brownlee joins Utah Jazz star Jordan Clarkson and 6-foot-11 Ateneo Blue Eagles standout Ange Kouame as the current naturalized players who are eligible to suit up for Gilas Pilipinas in the FIBA World Cup and for future tournaments.

With five PBA titles and two best import plums, Brownlee is now considered among the all-time greatest imports of the league and his career is far from over.

Brownlee is expected to fill in for Clarkson whenever the latter is not available because of his commitments to the Jazz in the National Basketball Association.

“With Brownlee as part of Gilas, we will be able to maintain the momentum going into the sixth window of the FIBA World Cup Asian Qualifiers this February. Things are definitely looking up for Philippine basketball and with the right amount support, our resurgence in the world hoops stage could definitely become a reality sooner than later,” Angara said.

The Philippines, alongside Indonesia and Japan will host the 2023 FIBA World Cup, which will start on August 25, 2023 and will culminate in Manila for the final phase from September 5 to 10, 2023.

Angara said that funding will be available in the 2023 national budget for the Philippines’ hosting of the FIBA World Cup.

The SBP Chairman reiterated that this will be a huge opportunity for the Philippines to showcase the country to the world when the biggest basketball stars converge in Manila for the FIBA World Cup.

“Each of these players are global brands in themselves and they will bring with them the fans from their respective countries, and their sponsors so the potential for tourism and business for the Philippines will be significant,” Angara said.

The Senator urged volunteers to start signing up for the event “to take part in history and to help make this one of the best World Cups ever.”