Angara: Time to start local studies on vaccination of minors 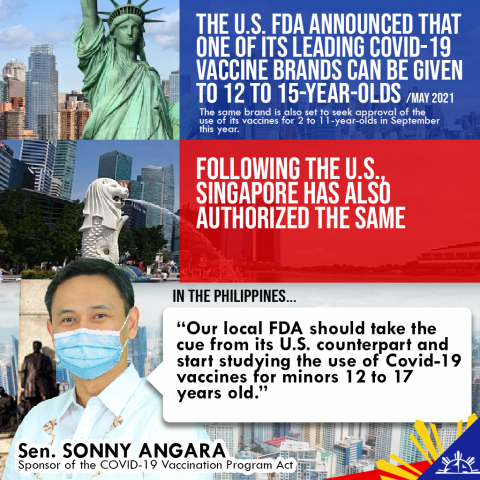 The local Food and Drug Administration (FDA) should take the cue from its counterparts in the United States and other countries and start studying the use of the available Covid-19 vaccines for children below 18, Sen. Sonny Angara said today.

“In so far as expanding the administration of vaccines to other age groups, we should always be ahead of the curve,” Angara said.

“Greenlighting” certain vaccines for school-age children will address the need of “the largest  population group” to be protected from the coronavirus.

“Outsmarting the virus requires the vaccination of students. There will be no return to normalcy, no herd immunity if they are not vaccinated,” Angara added.

The first step, he said, is  authorizing  certain vaccines for certain age groups. “That is the prudent thing to do. It complies with safety protocols.”

The Philippines, Angara said, can follow the lead of the United States when its FDA allowed one of its leading vaccine brands to be administered to 12 to 15-year-olds.

When the US rolled out its first jabs of the vaccine in December last year, it already covered individuals aged 16 to 85.

Closer to home, Singapore has also authorized the use of the same vaccine on 12 to 15-year-olds.

“This is a signal for us to commence our own independent studies on the matter,” Angara said.

Under the Philippine setting, the administration of vaccines is only being done for individuals aged 18 and above.

He said a safe coronavirus vaccine for children will be a game-changer for the country, for the economy, for the youth, and for families.

Their schools closed and locked down in their homes, children have borne the brunt of the pandemic, “barely  able to learn  under a distance learning setup crippled by  poor  broadband  and lack of digital handsets,” Angara said.

“If they are last to be vaccinated, then we are creating a lost generation from the left behinds,” he said.

If vaccinating children will lead to the physical opening of schools, Angara said it will also “liberate parents who have become teachers in a homeschool setting.”

The economy will tremendously benefit too as schools a create vibrant auxiliary industry from canteens, school buses and transport, food providers, uniform makers.”

On per student cost, vaccination is cheaper than the coping mechanism teachers, students and schools have been forced to adopt.

He said a roadmap in  children’s vaccination “will guide the executive and the legislative  branches  in preparing the budget of DepEd for 2022.”

Adding a new group to the vaccination list will also expedite vaccine consumption, especially now when the bulk of the country’s orders are starting to arrive.