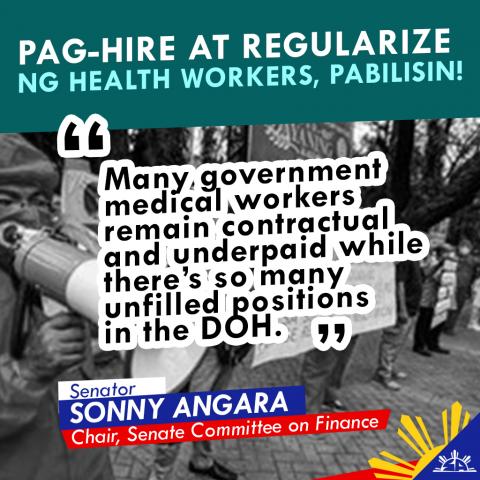 Senator Sonny Angara prodded the Department of Health (DOH) to address the issue of contractualization within its ranks and hasten the regularization of the doctors and nurses working in its hospitals and other facilities.

As chairman of the Committee on Finance, Angara confronted the DOH about underspending in the amount of P24 billion, a portion of which pertains to funding under the now expired Bayanihan 1 and 2 laws.

During the Blue Ribbon Committee’s hearings on the various issues related to the DOH, Angara said there are around P6 billion of funds under B1 and B2 that were unutilized, P1 billion of which has already reverted to the national treasury.

The Senator noted that the reverted P1 billion in funds was for the DOH’s human resource for health (HRH) program or the hiring of doctors and nurses and their deployment to areas where they are needed the most.

“May P1 billion na unobligated for HRH. Alam naman natin na umaangal ang ating nurses na they are not getting their benefits. Umaangal sila na ang starting salaries nila is lower than what is statutorily provided,” Angara said pertaining to the Nursing Act of 2002.

Considering that health workers are the most critical frontliners during this pandemic, Angara has repeatedly reminded the DOH to provide them with everything that they need, including all their benefits as provided under the law.

Among these are the monthly special risk allowance as provided for under the Bayanihan laws and the hazard allowance mandated under the Magna Carta of Public Health Workers.

But apart from ensuring the benefits are paid, Angara said the DOH should address the nagging issue of contractualization within its ranks.

“I was told DOH has 13,700 contractuals outside of those in the local government units. Baka naman there is a way to speed up the filling of positions. Kasi ang report that we are getting is nagaalisan na ang ating health professionals,” Angara said.

The DOH has noted that there are 13,428 unfilled positions out of its total of 80,308. Health Secretary Francisco Duque said that while he supports the filling up of the vacant plantilla positions right away, the DOH is prevented from doing so because of the qualification standards required, particularly the rules under the Civil Service Act.

Angara also cited the urgent need for the Philippine Health Insurance Corporation (PhilHealth) to settle the amounts due to the private hospitals.

“The situation I’ve been hearing in the private hospitals is quite dire. Nursing services ate only 30 to 50% of their usual manpower. The arrears from PhilHealth are over a year in the 10s or 20s of billions. Anong plano dito? Are we happy with the current state of affairs to continue? Are we not moving towards improving the situation?” Angara said.

Angara—Commuting is definitely a challenge. Let’s come up with solutions now
To help local industries, Angara pushes for locally-made slippers and toiletries for hotel guests
The government’s vaccination program may need its own booster shots – Angara
This World Teacher’s Day, let us give our beloved educators the pay that they deserve—Angara
Statement of Finance Committee Chairman Sen. Sonny Angara on the receipt of the 2020 GAB
SENIOR CITIZENS & PWD DISCOUNT CALCULATOR
ANGARA KAMPANTE NA HINDI MAANTALA ANG 2020 BUDGET SA SENADO
Angara sees the need to revive the Pasig River ferry service as an alternative for Metro Manila commuters
Statement on the enactment of RA 11459 or the Judges-at-Large Act
Angara- Government will continue its support for indigent seniors in 2020
Angara—Let’s address the perennial classroom backlog now
Angara: DA has P1 billion in QRFs to augment its budget to tackle the African Swine Fever
Angara seeks to streamline the process for constructing socialized housing units
Angara—Let’s help introduce our heroes to the children through film
Angara— We need to act on reducing plastic straw use now
Angara sees innovation as key to boosting exports
Statement of Samahang Basketbol ng Pilipinas Chairman, Senator Sonny Angara on the 2019 FIBA Basketball World Cup
Angara set to file bill amending the Good Conduct Time Allowance Law
Sen. Sonny Angara on the enactment of RA 11394 or the Mandatory Provision of Neutral Desks in Educational Institutions Act
Angara slams absurd application of the law in Mayor Sanchez’s case
END_OF_DOCUMENT_TOKEN_TO_BE_REPLACED