Senate approves the bill to further strengthen the SK -- Angara 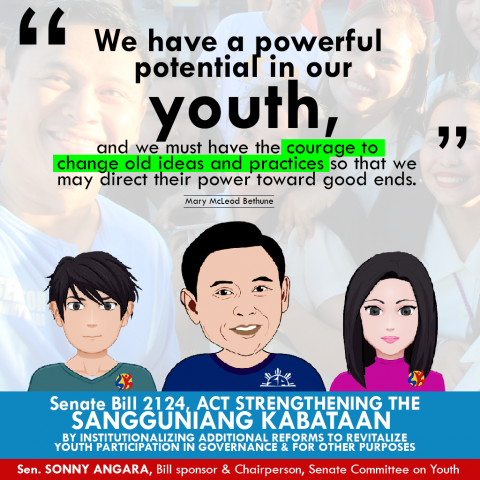 The Senate has approved on third and final reading the proposed amendments to Republic Act 10742 or the Sangguniang Kabataan (SK) Reform Act of 2015, which seeks to revitalize youth participation in governance.

Senator Sonny Angara, the Chairman of the Committee on Youth and the principal author and sponsor of Senate Bill 2124, said the measure will further empower the SK by addressing the various issues that have been raised about the youth organization.

“In the past there were calls for the abolition of the SK due to questions about its relevance and the supposed politicization of its youth members. I still believe that the youth should play a bigger role in nation building and a reformed SK law will help in achieving this,” Angara said.

One of the key amendments to the law is the grant of monthly honoraria to the SK members, secretaries and treasurers. At present, only the SK chairpersons are entitled to honoraria by virtue of their status as ex-officio members of the Sangguniang Barangays.

These allowances for the SK members will be charged against the SK funds, subject to the guidelines issued by the Department of Budget and Management.

“We put a cap of 25 percent for the utilization of the SK funds for personnel services. We did this to ensure that the bulk of the budget allocated to the SKs will go to programs and projects that will benefit the youth,” Angara said.

Among the programs and projects identified under the bill are the provision of student stipends, food, book and transportation allowances; sports and wellness projects; skills training, summer employment, cash-for-work, on-the-job training, and livelihood assistance; projects promoting the participation of the youth and their initiation in agricultural, fishery, and forestry enterprises; programs and activities that address context-specific and intersectional vulnerabilities of young people; and capacity building for grassroots organization and leadership.

Apart from the mandated honoraria under the law, Angara said the local government units are also allowed to provide additional honorarium, as well as social welfare contributions and hazard pay, to the SK chairperson, the elected and appointed members through their own local ordinances.

Another important amendment is on the qualification of the SK treasurer, who is now required to have an educational or career background in business administration, accountancy, finance, economics or bookkeeping and must be a bonded officer.

“We also expanded the age range for the SK treasurer to 18-30 so that there will be a bigger pool of candidates from which the SK will appoint this key officer given the competency that will now be required of them as treasurers,” Angara said.

The bill exempts SK officials from taking any of the components of the National Service Training Program.

SK officials will also be entitled to the appropriate Civil Service Eligibility, provided that they have rendered their full terms of office.

A Local Youth Development Officer must be appointed within a year of the effectivity of this law.

The presidents of the Panlalawigan Pederasyon ng mga Sangguniang Kabataan and the presidents of the Panlungsod na Pederasyon ng mga Sangguniang Kabataan of highly urbanized cities and independent component cities would elect from among themselves one representative each from Luzon, Visayas and Mindanao to serve as members of the National Advisory Council of the National Youth Commission (NYC).

The presidents of the two organizations will also elect among themselves one representative who shall sit as an ex-officio member of the NYC.

“Our youth represent a growing share of our electorate so we must support platforms that help engage them. Our work in reforming and improving the SK must continue, because the alternative—of not providing youth leadership and capacity building opportunities—would be worse,” Angara said.

“We thank Sens. Revilla, Marcos, Villanueva and Hontiveros for providing us with valuable inputs and for our colleagues who gave their support for the approval of this measure,” Angara added.