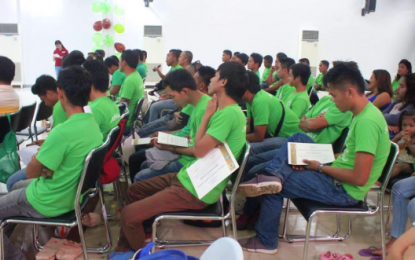 In the first half of President Duterte’s term, tokhang was the byword in the government’s war on illegal drugs.

Now that the President is on legacy mode, the anti-illegal drugs campaign should start shifting to reform and rehabilitation.

To complement the “soft” approach to fighting illegal drugs, Angara is pushing for the establishment of a National Anti-Illegal Drug Campaign and Research Program (AIDCARE), which aims to reform victims of substance abuse.

Under Senate Bill 765 filed by Angara, a multi-faceted approach to fighting illegal drugs will be adopted through AIDCARE.

It starts with the creation of a national education and awareness program on illegal drugs, which involves the inclusion of the subject either in the K to 12 curriculum or instituted as a regular and frequent co-curricular activity or event done in all public schools covering all levels of basic education.

A national helpline for drug abuse will be established to provide assistance to the drug users, either by referring them to the rehabilitation centers or to provide immediate paramedic response in emergency cases.

The Philippine Drug Enforcement Agency (PDEA) will come up and and maintain a public registry of drug dealers, pushers and traffickers who have already been convicted.

In order for the government to have an effective campaign against illegal drugs, the bill tasks the Dangerous Drugs Board, in cooperation with the Department of Interior and Local Government and PDEA to conduct a nationwide study on the nature and extent of drug abuse. The results of the study would be submitted to the Office of the President and Congress.

“The drug menace is something that we should continue to address. What we want to do with this bill is to look at the other side of the coin, which is the rehabilitation of the users as part of the overall solution,” Angara said.

INCOMING DBM SECRETARY NI PBBM, HIGHLY-QUALIFED, MAY MAIPAGMAMALAKING TRACK-RECORD -- ANGARA
Statement of Sen. Sonny Angara on the Appointment of Amenah Pangandaman as DBM Secretary
PDIC charter amendments for a stronger and more resilient banking system—Angara
Kaugnay sa muling paglobo ng COVID cases sa bansa: “MAGPABAKUNA, SUMUNOD SA HEALTH PROTOCOLS AT PATULOY NA PAG-INGATAN ANG KALUSUGAN” - ANGARA
Statement of Committee on Finance Chairman, Sen. Sonny Angara on the signing of the 2022 GAA
Angara reminds PhilHealth of their obligations to the public
Angara: Don’t let vaccines go to waste-- Allow booster shots for private sector workers
Threat of Omicron highlights need to improve biosurveillance and genome sequencing capabilities—Angara
SEN. ANGARA ON THE THREAT OF HOSPITALS TO WITHDRAW FROM PHILHEALTH SYSTEM BECAUSE OF DELAYED REIMBURSMENTS OF CLAIMS:
Angara: Decline in COVID cases should not result in complacency
Angara: Go the extra mile to vaccinate our senior citizens
Angara to DOLE: Targeted interventions needed to ensure no one is left behind
It’s about time to rebuild the homes of the people of Marawi—Angara
Angara: Benefits for health workers should continue while the COVID pandemic is in place
Angara urges youth impacted by COVID to avail of jobs under the Expanded SPES Law
Angara: The national budget must be able to keep pace with COVID-19
Angara hopes to finally see the passage of the Magna Carta of Filipino Seafarers
Angara: Move towards digital payments welcome to all sectors
Angara tells DOH to speed up hiring of doctors and nurses for public hospitals
Angara to DOH: Provide health workers with hazard allowance as mandated by law
END_OF_DOCUMENT_TOKEN_TO_BE_REPLACED