Angara: The national budget must be able to keep pace with COVID-19 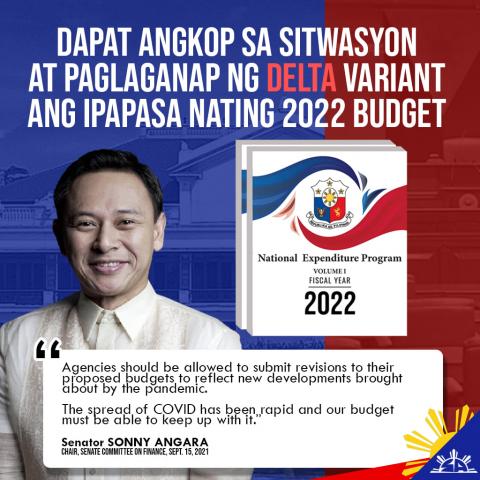 Senator Sonny Angara sees the need for more flexibility in the processes involved in the annual submission of the national budget to keep up with the constantly changing demands and situation on the ground during the pandemic.

As the chairman of the Committee on Finance, Angara noted that many of the requirements of the various government agencies and offices are not contained in the copy of the national budget submitted to Congress, particularly those related to the response to the COVID-19 pandemic.

During the Development Budget Coordinating Committee briefing for the Senate on the P5.024 trillion national budget for 2022, the Department of Budget and Management (DBM) noted that there were no provisions for the vaccination of minors, the provision of special risk allowance (SRA) for health workers, and other items related to the government’s response to the COVID-19 variants, including the highly-infectious Delta variant.

“With the emergence of Delta and the other COVID variants, the requirements of our frontline agencies are constantly moving. The situation is changing rapidly and so must our processes pertaining to the submission of the national budget,” Angara said.

The Constitution requires the President to submit to Congress the proposed national budget within 30 days from the opening of its regular session or by the third week of August every year.

“The agencies are required to submit their budget proposals early on so that the DBM will be able to prepare the voluminous document and have it ready for submission to Congress by the third week of August. Given this situation, it is understandable that a lot of key expenditures are not captured in the budget document,” Angara said.

“Agencies should be allowed to submit revisions to their proposed budgets to reflect new developments brought about by the pandemic. The spread of COVID has been rapid and our budget must be able to keep up with it,” the Senator added.

On the budget for the vaccination program, the DBM noted that the proposed 2022 national budget only contains funding for the purchase of booster shots for individuals who have already completed their jabs in the amount of P45 billion under the unprogrammed fund and not for the inoculation of children aged 12 to 17.

DBM OIC Tina Canda admitted during the DBCC briefing that “certain adjustments must be done” with the proposed budget of the Department of Health.

In the case of the SRA, the DBM did not include funding for this benefit for health workers because of the expiration of Republic Act 11519 or the Bayanihan to Recover as One Act (Bayanihan 2) where this was introduced.

As the sponsor and author of Bayanihan 2, Angara has noted that the SRA is among the various benefits for health workers that will continue even after the expiry of Bayanihan 2 for as long as the state of public health emergency as declared by President Duterte is in place.

Angara and Senator Richard Gordon have filed Senate Bill 2371 to remove any confusion regarding the continued grant of the SRA and other benefits under Bayanihan 2. The Committee on Finance is set to conduct a hearing on the bill.

The DBM has also noted that there is no item in next year’s budget for testing and contact tracing, something which Angara and the other senators said should be funded as integral components of the country’s efforts to contain the spread of COVID-19.

Angara said there may also be a need to include cash aids or ayuda especially with some areas under lockdown due to the fluctuations in the number of active COVID cases.

For the micro, small and medium enterprises that continue to bleed due to extended community quarantines, Angara said the low-interest loans provided to them under Bayanihan 2 should continue even after the expiration of the law last June 30.