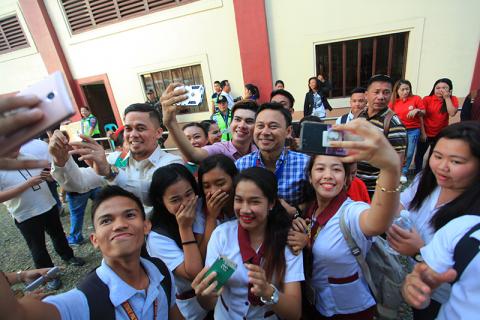 It’s never too late to earn a college degree.

This was the advice of reelectionist Senator Sonny Angara to over 360,000 unemployed university dropouts, as well as high school graduates but did not proceed to college, as he urged them to return to school and take advantage of the government’s free tertiary education.

The senator, who is running under the platform “Alagang Angara,” encouraged these jobless college dropouts and high school graduates to enroll since they were still eligible for free higher education in 112 SUCs across the country.

“This is their chance to complete their college degrees and create a brighter future for themselves and their families,” said the senator.

In 2018 there were around 2.3 million jobless Filipinos, according to the Labor Force Survey conducted by the Department of Labor and Employment, and 16 percent of this number or roughly 368,000 were college undergraduates.

Angara, who strongly believes that education is the great socioeconomic equalizer and a stepping stone to something higher, said that finishing college means being able to pursue employment opportunities that were unavailable without a degree.

“College education could ensure that all children of any class have a shot at success,” he said, noting that good jobs that do exist require higher education.

For those who dropped out of college but are already working, Angara encouraged them to continue their studies and earn a degree. “We’ve heard a lot of stories of college dropouts who want to finish their degree to set an example for their own children. For some, it means being able to finally apply for that promotion at work.”

Aside from free tuition and miscellaneous fees in SUCs, another important component of RA 10931 was the Tertiary Education Subsidy or TES, a grants-in-aid program that provides funding for students from the poorest-of-the-poor households enrolled in public and private higher education institutions (HEIs).

As vice chairman of the Senate finance committee, Angara sponsored the 2019 budget of the Commission on Higher Education (CHED) which includes an allocation of P46 billion for the implementation of RA 10931, making it the biggest budget for free college education in Philippine history.

Even with free tuition in public universities and colleges, Angara said students enrolled in private HEIs will continue to receive scholarship grants from government.

ee education—from kindergarten to college—is one of Angara’s advocacies. His father, the late Senate President Edgardo Angara, was the author of the Free High School Act that ensured secondary education even for the poorest.

Angara is also the author of the Universal Kindergarten Education Act of 2012, when he was a member of the House of Representatives, representing the lone district of Aurora province.