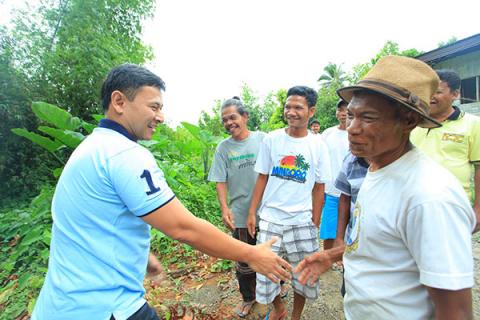 Reelectionist Senator Sonny Angara asked the government to look into the possibility of providing provisional employment to drought-stricken farmers and farmworkers under the Duterte administration’s “Build, Build, Build” program to help them deal with the temporary loss of income or livelihood due to El Niño phenomenon that is expected to be felt until August this year.

Angara said the infrastructure initiative—the centerpiece program of the Duterte administration—aims to generate around one million jobs annually in the medium-term and presents a silver lining for farmers who belong to 60 percent of the poorest of the poor in the country.

“Many of our farmers and farmworkers have already started to look for jobs in construction sites to earn a living after losing their crops to the ongoing dry spell. I hope they can be accommodated in the Build, Build, Build program,” said the lawmaker from Aurora who is running under the platform “Alagang Angara.”

The Department of Labor had announced that the government would need 800,000 to 1 million construction workers to fill in the labor gaps of its priority infrastructure program, where a total of 75 flagship projects with a combined total of $36 billion in investments are to be put up in various parts of the country.

These workers are needed for the construction of six airports, nine railways, three bus rapid transits, four seaports and 32 roads and bridges in Negros Oriental, Leyte, Cebu Bohol and Misamis Occidental, among others.

Angara has earlier appealed to government to dispatch immediate help to farmers who are now bearing the brunt of El Niño-induced drought. He said many farmers, especially those in food-growing areas in the country, are in urgent need of assistance whether in the form of cash, food aid or alternative livelihoods.

He made the appeal after several provinces and cities in the country have been placed under state of calamity due to the impact of El Niño.

Based on previous reports, the hardest hit region is SOCCSKSARGEN, followed by Bicol, the Bangsamoro Autonomous Region in Muslim Mindanao, MIMAROPA, Western Visayas, and CALABARZON.

According to the country’s state weather bureau PAGASA, El Niño conditions are expected to last until August from the previous forecast of June this year.

Angara celebrates the enactment of three laws for the youth
Statement of Sen Angara on the Enactment into Law of the Social Pension for Seniors
Sen. Angara on the passing of former Pres. Fidel V Ramos
Angara-- Restore the heritage sites damaged by the Abra quake at the soonest possible time
Angara sees the establishment of satellite specialty hospitals as timely and doable
Reaksyon ni Sen. Sonny Angara sa SONA ni PBBM
Statement of Senator Sonny Angara
INCOMING DBM SECRETARY NI PBBM, HIGHLY-QUALIFED, MAY MAIPAGMAMALAKING TRACK-RECORD -- ANGARA
Statement of Sen. Sonny Angara on the Appointment of Amenah Pangandaman as DBM Secretary
PDIC charter amendments for a stronger and more resilient banking system—Angara
Kaugnay sa muling paglobo ng COVID cases sa bansa: “MAGPABAKUNA, SUMUNOD SA HEALTH PROTOCOLS AT PATULOY NA PAG-INGATAN ANG KALUSUGAN” - ANGARA
Statement of Committee on Finance Chairman, Sen. Sonny Angara on the signing of the 2022 GAA
Angara reminds PhilHealth of their obligations to the public
Threat of Omicron highlights need to improve biosurveillance and genome sequencing capabilities—Angara
Angara: Don’t let vaccines go to waste-- Allow booster shots for private sector workers
SEN. ANGARA ON THE THREAT OF HOSPITALS TO WITHDRAW FROM PHILHEALTH SYSTEM BECAUSE OF DELAYED REIMBURSMENTS OF CLAIMS:
Angara: Decline in COVID cases should not result in complacency
Angara: Go the extra mile to vaccinate our senior citizens
Angara to DOLE: Targeted interventions needed to ensure no one is left behind
It’s about time to rebuild the homes of the people of Marawi—Angara
END_OF_DOCUMENT_TOKEN_TO_BE_REPLACED