Angara to PhilHealth: Expedite the settlement of hospital claims 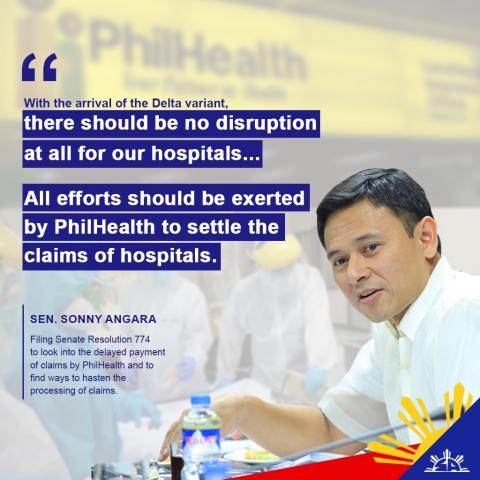 Most of the country’s hospitals have been facing extreme pressures due to the COVID-19 pandemic so whatever the government owes them for their services should be settled swiftly, Senator Sonny Angara said today.

“There is growing concern over a possible surge of new cases of COVID-19 now that the deadly Delta variant of the virus is already in the country so our hospitals should be prepared to deal with this scenario,” Angara said.

A persistent issue being raised by both the government and private hospitals is the delay in the settlement of their claims from the Philippine Health Insurance Corporation (PhilHealth), which adds to the pressures being faced by these facilities.

Many of the hospitals have faced financial difficulties due to these delays and in several instances, they have been forced to downsize their operations either by reducing their bed capacity or the working hours of their personnel.

“With the arrival of the Delta variant, there should be no disruption at all for our hospitals, especially when a surge in cases is highly possible. All efforts should be exerted by PhilHealth to settle the claims of these hospitals, particularly those that have been delayed for some time already,” Angara said.

Angara has filed Senate Resolution 774 to look into the delayed payment of claims by PhilHealth and to find ways to hasten the processing of these claims.

Last May, the Philippine Hospital Association (PHA), an organization composed of close to 2,000 private and government hospitals, reported that several of its members have been experiencing severe financial distress due to their unpaid claims from PhilHealth.

PHA president Jaime Almora said the claims of their members range from P50 million to P700 million, with one hospital accruing up to P1.2 billion.

Almora noted how many of these health care facilities have “to dig into their savings or borrow from banks for their operating budget.”

The Private Hospitals Association of the Philippines Inc. (PHAPI) has experienced the same issues. In April, PHAPI president Jose De Grano disclosed that PhilHealth has accumulated an estimated P28 billion in unpaid claims to private hospitals covering the period of March to December 2020.

According to PhilHealth president and CEO Dante Gierran, the slow settlement of claims was due to the COVID-19 pandemic, which has resulted in a reduction in the workforce of the state health insurance provider.

While PhilHealth has responded with initiatives to facilitate the payment of claims by the health care facilities, Angara said that the amounts settled are but a small fraction of what is due to these providers.

Based on the Direct Credit Payment Method scheme implemented by PhilHealth, P6.3 billion in hospital claims have already been released to 206 health care facilities.

“This is but a drop in the bucket if we consider the P28 billion in unpaid claims cited by the PHAPI. Something must be done to improve the processes of PhilHealth so that the operations of our hospitals will not be affected especially during this time,” Angara said.

INCOMING DBM SECRETARY NI PBBM, HIGHLY-QUALIFED, MAY MAIPAGMAMALAKING TRACK-RECORD -- ANGARA
Statement of Sen. Sonny Angara on the Appointment of Amenah Pangandaman as DBM Secretary
PDIC charter amendments for a stronger and more resilient banking system—Angara
Kaugnay sa muling paglobo ng COVID cases sa bansa: “MAGPABAKUNA, SUMUNOD SA HEALTH PROTOCOLS AT PATULOY NA PAG-INGATAN ANG KALUSUGAN” - ANGARA
Statement of Committee on Finance Chairman, Sen. Sonny Angara on the signing of the 2022 GAA
Angara reminds PhilHealth of their obligations to the public
Angara: Don’t let vaccines go to waste-- Allow booster shots for private sector workers
Threat of Omicron highlights need to improve biosurveillance and genome sequencing capabilities—Angara
SEN. ANGARA ON THE THREAT OF HOSPITALS TO WITHDRAW FROM PHILHEALTH SYSTEM BECAUSE OF DELAYED REIMBURSMENTS OF CLAIMS:
Angara: Decline in COVID cases should not result in complacency
Angara: Go the extra mile to vaccinate our senior citizens
Angara to DOLE: Targeted interventions needed to ensure no one is left behind
It’s about time to rebuild the homes of the people of Marawi—Angara
Angara: Benefits for health workers should continue while the COVID pandemic is in place
Angara urges youth impacted by COVID to avail of jobs under the Expanded SPES Law
Angara: The national budget must be able to keep pace with COVID-19
Angara hopes to finally see the passage of the Magna Carta of Filipino Seafarers
Angara: Move towards digital payments welcome to all sectors
Angara tells DOH to speed up hiring of doctors and nurses for public hospitals
Angara to DOH: Provide health workers with hazard allowance as mandated by law
END_OF_DOCUMENT_TOKEN_TO_BE_REPLACED