Statement of Sen. Sonny Angara on the inquiry into the anomalies in PhilHealth 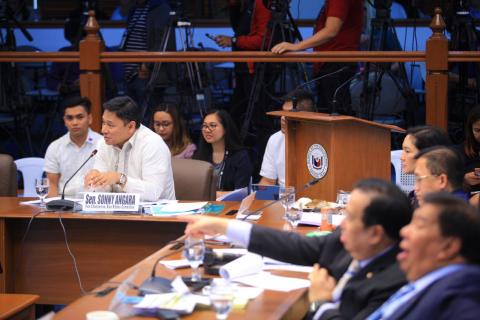 Clearly, the Philippine Health Insurance Corporation (PhilHealth) has a multitude of problems that has led to this situation where we have individuals and health care providers defrauding the government of hundreds of millions in funds that should be going to Filipinos struggling to cope with their medical needs.

This is not new as what we saw during the hearing. It appears there are unscrupulous individuals within the PhilHealth who have access to the database of members and are manipulating the processing of claims for their own benefit.

What is very clear is that these PhilHealth evaluators have very broad discretionary powers that allow them to increase, deflate and accelerate the processing of claims.

While we are still uncovering more anomalies taking place within our state health insurance provider, there are already steps that we can take to help stop the bleeding.

Don’t get me wrong, we’re not talking about instituting a spy system within PhilHealth, but rather a system that will be able to spot anomalies efficiently.

Anti-fraud is a necessary expense that is self-recouping because it deters costly fraud that would leave a hole in PhilHealth’s pocket.

For a multi-billion corporation, PhilHealth should have in place a strong IT system that is capable of coming up with a more transparent billing process. If the telcos are capable of counting, up to the last second, the calls and texts of tens of millions of its subscribers, then why can’t PhilHealth do something similar so that its members would be able to know how much they will have to pay for their hospitalization.

It should be noted that both the PhilHealth charter and the Universal Healthcare Act contain penal provisions against illegal acts. Has the PhilHealth been able to go after anyone from within its ranks who were involved in these scams? I find it disturbing that we do not seem to hear about any PhilHealth personnel being charged either administratively or criminally. Ang mas maugong ay ang parami ng parami na mga kaso ng fraud na nangyayari sa PhilHealth na mukhang walang ginagawa para mapigilan ito.

INCOMING DBM SECRETARY NI PBBM, HIGHLY-QUALIFED, MAY MAIPAGMAMALAKING TRACK-RECORD -- ANGARA
Statement of Sen. Sonny Angara on the Appointment of Amenah Pangandaman as DBM Secretary
PDIC charter amendments for a stronger and more resilient banking system—Angara
Kaugnay sa muling paglobo ng COVID cases sa bansa: “MAGPABAKUNA, SUMUNOD SA HEALTH PROTOCOLS AT PATULOY NA PAG-INGATAN ANG KALUSUGAN” - ANGARA
Statement of Committee on Finance Chairman, Sen. Sonny Angara on the signing of the 2022 GAA
Angara reminds PhilHealth of their obligations to the public
Angara: Don’t let vaccines go to waste-- Allow booster shots for private sector workers
Threat of Omicron highlights need to improve biosurveillance and genome sequencing capabilities—Angara
SEN. ANGARA ON THE THREAT OF HOSPITALS TO WITHDRAW FROM PHILHEALTH SYSTEM BECAUSE OF DELAYED REIMBURSMENTS OF CLAIMS:
Angara: Decline in COVID cases should not result in complacency
Angara: Go the extra mile to vaccinate our senior citizens
Angara to DOLE: Targeted interventions needed to ensure no one is left behind
It’s about time to rebuild the homes of the people of Marawi—Angara
Angara: Benefits for health workers should continue while the COVID pandemic is in place
Angara urges youth impacted by COVID to avail of jobs under the Expanded SPES Law
Angara: The national budget must be able to keep pace with COVID-19
Angara hopes to finally see the passage of the Magna Carta of Filipino Seafarers
Angara: Move towards digital payments welcome to all sectors
Angara tells DOH to speed up hiring of doctors and nurses for public hospitals
Angara to DOH: Provide health workers with hazard allowance as mandated by law
END_OF_DOCUMENT_TOKEN_TO_BE_REPLACED