Angara: DA has P1 billion in QRFs to augment its budget to tackle the African Swine Fever 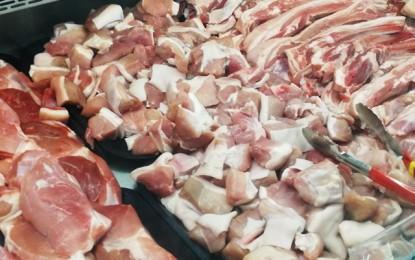 The Department of Agriculture (DA) has P1 billion in Quick Response Funds (QRF) under this year’s Calamity Fund that it can tap to stop the spread of the African Swine Fever (ASF), Sen. Sonny Angara said today.

Angara, chairman of the Senate finance committee, said government should now “break the glass of this emergency fund” and use it to implement the DA’s containment protocol against a disease which threatens a key food source that also adds P280 billion to the economy annually.

“This ASF is by all accounts a calamity. It may not have the dramatic footage that typhoons create, but in terms of damage to livelihood, and the households affected, it is just as damaging,” Angara said.

Angara said stopping the spread of ASF must be done now before it engulfs the entire industry and endanger the jobs of tens of thousands of people.

“If agriculture disasters like pests, droughts and ASF are rated, the latter has the potential of becoming a high-category calamity, “ Angara said.

Angara said funding for anti-ASF measures can be sourced from the P20 billion National Disaster Risk Reduction and Management Fund, more commonly known as the Calamity Fund, in the General Appropriations Act for 2020.

Under this fund, the DA is assigned P1 billion in QRF, “which by their nature, should have been forward-deployed to these agencies.”

It was only on September 10 that the Department of Budget and Managed released P82.5 million to the DA to carry out measures to “arrest and abate” the spread of ASF.

Angara noted that 35 percent of the amount or P32 million will be spent to boost security screening measures at the international airports.

Another P28 million will go to laboratory testing of meat and meat products.

“It is good that we’re strengthening our quarantine curtains, but what we lack are funds to fight ASF on the ground lalo na ngayon na fully mobilized na ang mga local governments.  In the future, ito siguro ang mangangailangan ng pondo,” he said.

“But if the ASF epidemic will worsen, and will down many farms, and some financial aid for those stricken is needed, then this can be included in the 2020 budget.  Eh yan naman kasi will take effect less than 100 days from now,” Angara said.

Another “point of interest” that the ASF outbreak has generated that both Congress and the executive branch should look into is “how to strengthen our food biosecurity and food safety measures.”

Statement of Senator Sonny Angara
INCOMING DBM SECRETARY NI PBBM, HIGHLY-QUALIFED, MAY MAIPAGMAMALAKING TRACK-RECORD -- ANGARA
Statement of Sen. Sonny Angara on the Appointment of Amenah Pangandaman as DBM Secretary
PDIC charter amendments for a stronger and more resilient banking system—Angara
Kaugnay sa muling paglobo ng COVID cases sa bansa: “MAGPABAKUNA, SUMUNOD SA HEALTH PROTOCOLS AT PATULOY NA PAG-INGATAN ANG KALUSUGAN” - ANGARA
Statement of Committee on Finance Chairman, Sen. Sonny Angara on the signing of the 2022 GAA
Angara reminds PhilHealth of their obligations to the public
Threat of Omicron highlights need to improve biosurveillance and genome sequencing capabilities—Angara
Angara: Don’t let vaccines go to waste-- Allow booster shots for private sector workers
SEN. ANGARA ON THE THREAT OF HOSPITALS TO WITHDRAW FROM PHILHEALTH SYSTEM BECAUSE OF DELAYED REIMBURSMENTS OF CLAIMS:
Angara: Decline in COVID cases should not result in complacency
Angara: Go the extra mile to vaccinate our senior citizens
Angara to DOLE: Targeted interventions needed to ensure no one is left behind
It’s about time to rebuild the homes of the people of Marawi—Angara
Angara: Benefits for health workers should continue while the COVID pandemic is in place
Angara urges youth impacted by COVID to avail of jobs under the Expanded SPES Law
Angara: The national budget must be able to keep pace with COVID-19
Angara hopes to finally see the passage of the Magna Carta of Filipino Seafarers
Angara: Move towards digital payments welcome to all sectors
Angara tells DOH to speed up hiring of doctors and nurses for public hospitals
END_OF_DOCUMENT_TOKEN_TO_BE_REPLACED